It has Nothing to do with Me

I have spent half my life living in Paris and Prague. Both cities and the cultures they represent have inspired and enriched my writing.

I am still fascinated by the contrasts between them. Paris represents reason and the enlightenment. Prague is a medieval and Baroque city associated with mystery. The wide boulevards of Paris are vistas leading to major monuments of French culture, and many of them represent classical architecture, with its straight columns and linear window treatments: the Louvre, the Church of the Madeleine, the 19th century housing designed by Baron Hausmann. Prague’s Old Town has preserved the torturous narrow streets of its medieval origins, and the left bank, Malá strana, the slightly more spacious winding lanes laid out during the Counter Reformation. Prague is known as the “City of a Hundred Spires”, and it could just as easily be called the “City of a Hundred Domes”. Its churches, palaces and town homes feature curves and counter curves, broken pediments and rounded arches in their window treatments.

The defining building material of Paris is elegant limestone whose warm tones are shown at their best by the evening sun. Prague is a city of pastels inspired by the Italian architects who worked there in the 17th and 18th centuries. In the autumn, the tones of the changing leaves are echoed in the ochre and burgundy-coloured façades.

The gardens of Paris, the Tuileries, those of the Luxembourg palace, are sumptuously planned à la française. Plants are set out, often in symmetrical designs and particular colour schemes, and they may be replaced after a time by another design. Although this type of cultivation was copied in the curving designs of Prague’s hidden Baroque gardens, that city’s defining feature is an apple orchard on one of its seven hills, right in the middle of the left bank, and the untamed trees and flowering bushes that cascade down the Letna embankment and are left to grow naturally on the islands in the river.

These features are not necessarily present in an obvious way in my writing, but at the very least, they are always in the back of my mind. I have spent more years in Paris, but lived in Prague before, during and after the fall in Communism in 1989. Here is a short story set there in the aftermath of the Velvet Revolution. 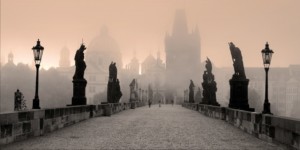 END_OF_DOCUMENT_TOKEN_TO_BE_REPLACED

When I read, I don't really read; I pop a beautiful sentence into my mouth and suck it like a fruit drop.