Music for Three in a Prelude to Revolution

When she graduates from the Juilliard School in 1988, free-spirited Katherine Angelis balks at family expectations pointing to the rigorous life of the concert circuit. A grant to study the original of a composition by Dvořák gives her a year off in Prague –a city which her family fled after the Communist coup d’état four decades earlier.

Far from home, in a culture whose literature, art and music she has cherished since childhood, Katherine revels in speaking her ‘second language’ and the beauty of Prague. But her year of quiet reflection is complicated by a love triangle with an activist and a reclusive cellist. And she readily accepts the opportunity offered by her new Czech friends to join dangerous covert resistance against a hard-line regime in place since the ‘brotherly assistance’ of the Warsaw Pact invasion.

As she discovers new purpose translating and smuggling human rights reports out to the West and blacklisted books in, Katherine feels that opposing the kind of tyranny that has hurt her family and millions of others is a special kind of music…

In a lyrical and nuanced narrative, Janet Savin dramatizes accelerating protest against a brutal and desperate regime in one of Europe’s most beautiful old cities. This first of two volumes draws from her life in Prague during the buildup to the Velvet Revolution and offers a poignant and richly detailed story of an expatriate family’s longing for their home land and a young woman’s search for her place in its heritage. 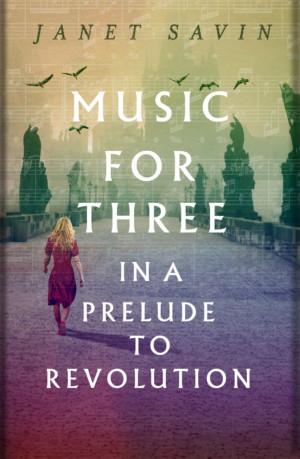 When I read, I don't really read; I pop a beautiful sentence into my mouth and suck it like a fruit drop.