Václav Havel, the Velvet Revolution and Filming ‘in Truth’

Seventeenth November is the 31st anniversary of the Velvet Revolution. The face of that Revolution in his own country and in the West remains Václav Havel, a complex, elusive thinker, writer, resistant and statesman who continues to fascinate. The most recent biography in English was published last spring by the University of Pittsburgh Press, and a new biopic by the young Czech director Slávek Horák was released in Prague late last summer. So far, it has not been released elsewhere. I have seen only a trailer, so this is a reportage about its controversial reception at home and the questions it has raised there.

The film begins in the summer of 1968, when Havel is enjoying the cultural, political and sexual freedom of the reform movement and success as a young playwright. All of that is destroyed by the Warsaw Pact invasion, and so begins his gradual politicization. Inspired by his wife Olga, he refuses to sign a conformist document approving the invasion, and they are both fired from their jobs. The absurd contrast between his next one, manual work at a brewery, and his upper class origins move him to begin writing again. He gets to know underground culture, especially musicians, which ultimately contributes to the foundation of Charter 77.

A transformative incident occurs during this period in the spring of 1977. Worn down by incessant interrogation, detention and the prospect of a lengthy prison sentence which would render him idle intellectually, Havel agrees to abstain from political activity in exchange for release. He immediately regrets this act of cowardice and, full of self-reproach, commits anew to active political opposition. Later during this period of dissidence, he has a serious love affair that strains his marriage to Olga – not for the first time. The final section of the film covers his dramatic evolution as opposition leader during the Velvet Revolution, culminating in his election to the presidency.

Horák has said that he did not want to make a traditional biopic, but one that explored Havel’s personal life, and saw events through his eyes. This necessarily meant including lesser-known incidents and aspects of his character. He and co-scenarist Rudolf Suchánek focus on Havel’s complex relationships with women, characterized by serial infidelity and a certain emotional dependence, and what they consider a central paradox of his dissident activity: committing courageous acts out of cowardice.

Viktor Dvořák, a theatre and television actor, has the lead role, and Anna Geislerová, an established film actress, partners him as Olga. Jiří Bartoška plays the philosopher and co-founder of Charter 77 Jan Patočka, who died following police interrogations. Bartoška is a veteran of television, film and theatre, who acted in Czech productions of Havel’s plays once they came off the black list. Barbora Seidlová plays Anna Kohoutová, Havel’s lover.

The acting and photography have generally been praised. Despite Dvořák’s striking resemblance to the young Havel and his many-sided portrayal, it is the director’s conception of character that has created controversy. Critics and some members of the public have complained that an extraordinary man is presented as ordinary, some ven say, caricatured, and that the political dimensions of his story are not insufficiently treated. (Havel’s classics “Letter to Gustáv Husák” and The Power of the Powerless are not included, and the individual resistants with whom he formed bonds and created Charter 77 are given minimal treatment.) Other critics point out softer, lesser known qualities emphasized by the film: Havel’s generosity, his modesty, his unflinching self-examination.

A collective of his close friends and associates has written an open letter criticizing what they call the portrayal of an “indecisive weakling” instead of the “humanized” portrait that the director himself said he wished to create. They object to the simplified treatment of a dissident and statesman whom they characterise as charismatic, highly articulate and strong, even with his hesitations and fragility. To them too, it borders on caricature. They are concerned that the entire world of dissent is misrepresented, and that in the process, an important symbol of modern Czech identity is weakened. In the Czech Republic of the present day, this is an important question.

The weekly journal Respekt has considered this question in a new ten-page article entitled “How to Film Havel”. Frequent cover caricatures, such as the one on this issue, are part of its politically engaged style, but there may be an additional reason this time. The author, the journal’s cultural editor, also judges the film to be a caricature.

The article situates the film within the broad historical questions that are alluded to in the open letter. “Truth” and “reality” become key words in its analysis. “Truth prevails” is the national motto, and forms part of the motto of Charter 77. Their inspirations go back to the 15th century religious reformer Jan Hus, who was burned at the stake and maintained that truth was a great moral power rather than a military one. Václav Havel called his opposition to the lies of the Communist regime ‘living in truth’. His most famous slogan during the Velvet Revolution was “Truth and love must win over lies and hatred.” 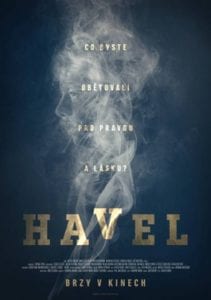 The film poster recalls this quotation with the question: “What would you sacrifice for truth and love?” The Respekt article maintains that the film does not do justice to the depth and complexity of this particular history and points out that the word “history” exists only in the plural in the Czech language. The editor discusses the difficulty of trying to determine what reality and historical truth are in film, and in particularly in Czech culture where history was drastically rewritten to conform to ideology during forty years of Communism. She suggests that the question ‘How do you film Havel’ has not yet been satisfactorily answered.

I lived in Prague during the late 1980’s and the Velvet Revolution and shared the euphoria when Communism implodedand Václav Havel was unanimously elected president by a Communist-dominated legislature. I hope to have the opportunity to see Horák’s controversial film at some point and to reflect on the political and psychological questions that it raises and that others have raised about it.